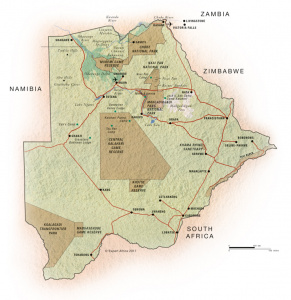 According to the UNDP (United Nations Development Program) and SADC (Southern African Development cooperation), Botswana has made significant gains since independence (1966) but still faces a number of daunting challenges. Economic growth has not yet had the desired impact on poverty levels, and an estimated 30 percent of the population lives below the poverty line. An important feature of poverty in Botswana is its high incidence in rural areas and especially among female-headed households. Botswana’s HIV/AIDS problem too has a distinct gender dimension, with twice as many women as men infected with the virus.

The high prevalence of poverty is attributable in part to the country’s narrow economic base (diamonds). The major challenge for Botswana is therefore, economic diversification away from diamonds. By building fair trade partnerships with arts and crafts dependent communities in Botswana, AFORA works towards achieving these goals.

An impressive 40% of the country’s land area is designated as protected. In line with the Arts for Africa’s mission,  Botswana’s Community Based Natural Resource Management (CBNRM) Policy of 2007 places emphasis on the participation of communities in the conservation and management of environmental resources. Botswana’s vision and Millenium development Goals for 2016  are not only aimed at promoting community support and incentive for conservation but to also facilitate benefit acquisition and sharing as natural resources play a key role in the livelihoods of households and communities in rural Botswana.

Under the Crafthood programme, Arts for Africa works with several basketry groups and cooperatives in Botswana.